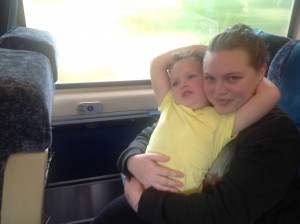 Conversation overheard on a train…..

“That’s not how you talk to Mummy. That’s very rude. Please say you are sorry.”

“That’s ok darling, I forgive you. That’s what happens when you do something wrong. You say you are sorry. You are forgiven. Ok?”

“Ok. I am sorry I yelled at you. Will you forgive me?”

It was a very long train trip, a very small child and a mother on her own, trying to keep her little girl sufficiently entertained on the journey, no doubt to make sure that the child doesn’t disturb other passengers. I am one of them.

Child starts singing……… (Forgetting most of the words. “Mummy you sing it.”

“Ok. Ok. Shush. I will google the lyrics and then, when I find it, I’ll sing it properly. Is that ok?”

“Would you like to go for a little walk?”

I am on a train ride to Sawtell. Like the rest of the world I am reeling from the terrorist attack on Malaysian Airlines killing innocent civilians, some from Australia and one even from my own city of Canberra. The world is in shock. Facebook is full of the expressions of helplessness and horror that people are feeling right now. It seems the world has taken a hit that is reminiscent of 9/11 and more recently the speculation about the missing plane, that disappeared without a trace, also via Malaysian Airlines. And of course, for Australians, the Bali bombings, from over a decade ago.

I wanted comforting. I wanted someone to hold me close and to tell me that the world is still a good place. That there is still hope for humanity.

I text-messaged the man I my life; the one who is more worldly than I am. He is the only one in my life who is capable of comforting me about matters international – he has worked in more countries than I could ever dream of visiting. And I wished he were here right now. But he wasn’t, so I began the train journey to visit my parents, who would also be in shock, I know. They are world travellers too. In their 80s now, they have travelled overseas every year as far back as I can remember.

And as I sat in silence, the child started to sing……the mother sang to the child ….and their beautiful conversation continued for much of the journey.

She read to the child, and adapted the story to fit with the train journey we were taking at this very minute.

I smiled as I eavesdropped on their dialogue – and so did the other passengers in the train. The two had a beautiful relationship and the child was so lucky to have such a wonderful mother.

“Bella”, she called her……and she was indeed beautiful!

And it was in that moment that I realised that the world is still a beautiful place, with lots of beautiful people – and we must NEVER lose hope – it’s right there – in the faces of this child and her mother.

The future is in good hands!!!